In summer 2014, Ben Fenton of  Thames21’s  Love the Lea campaign got in touch with Lancastrian musician, artist and writer, Rob St John, with an unusual commission in mine; could Rob design a project to creatively explore and document the pollution along London’s River Lea.

The project – Surface Tension – is finished, resulting in an album of new music and field recordings, and a book of writing and photographs documenting the Lee Valley.
The exhibition is now open at the Stour Space, Hackney Wick, E3 2PA throughout April.
Rob walked most of the length of the London Lea making field recordings using binaural microphones, underwater hydrophones and contact mics, while also taking photographs using a vintage 120 camera and a 35mm pinhole camera made from a Lesney toy matchbox.
Over autumn and winter the recordings and photographs were processed in ways that were designed to echo the water pollution in the Lea, tape loops and photo negatives were soaked in tubs of polluted Lea river water containing duckweed, decaying leaves and oil slicks which added new layers and flares to the images and the tape loops.
You can hear Rob on Stuart Marconie’s Freak Zone
Read what Uncut Magazine said about it here
There are also some copies of the Surface Tension book and album available here
Or you can download the whole track here

Join us at the Stour Space on Wednesday 22nd April 7pm - 9pm for Rob St John in conversation  with Cheryl Tipp from the British Library Wildlife Sound Archive a playback of the full Surface Tension release and a listen to some of the sound recordings taken throughout the project. 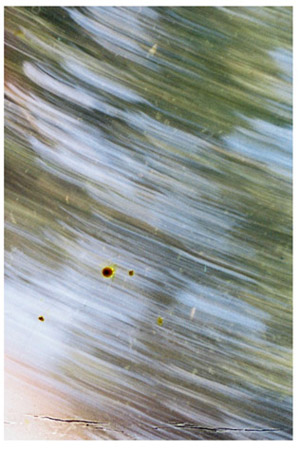