Abstraction reduction for the River Beane

At the start of April 2017 Affinity Water reduced the amount of water they take from the environment by sixteen million litres per day (16Ml/d) at one of their pumping stations near Watton-at-Stone.

The particular pumping station linked to the River Beane has been used since the 1950s, and it is expected that reducing the abstractions will benefit flows in the chalk stream and surrounding environment.

The River Beane in Hertfordshire often runs dry, particularly during the summer months. Affinity Water, the Environment Agency and the River Beane Restoration Association have been working together for over 20 years to assess the impact of abstractions on the environment. The reduction was agreed as a result of extensive consultation with Affinity Water customers and local groups in 2013.

Debbie Jones Environment Manager for the Environment Agency said "This is a great example of what we can achieve by working together with companies like Affinity Water. I look forward to seeing the River Beane chalk stream improve, and I'm delighted that it could be delivered a year early. This is a fantastic success which will help to restore the River Beane for the benefit of people and wildlife".

Mike Pocock, Director of Asset Strategy, Affinity Water said: "We strongly believe that leaving more water in the environment and working in partnership with the Environment Agency to deliver environmental improvements, will benefit our communities and our customers through the restoration of our chalk streams. We will be monitoring water flows and the ecology to assess the effectiveness of these changes over time."

This change was originally planned for April 2018, but Affinity Water have managed to put all the required infrastructure in place one year early. This is great news for the wildlife in the river and the people who value it.

Dave Stimpson, River Beane Restoration Association said: "The River Beane Restoration Association congratulates Affinity Water in bringing forward the 90% reduction of abstraction at the pumping station by a complete year. We have campaigned for twenty five years for a large reduction because the river has suffered for a long time from over abstraction causing low flows and drying in some areas. We look forward to continuing to work with Affinity Water on assessing the environmental improvements expected as a result. This is a significant achievement."

The River Beane is particularly valuable because it is a chalk stream - a globally rare, iconic habitat. There are around 200 chalk streams in England, of which 10% are located in Affinity Water's supply area. 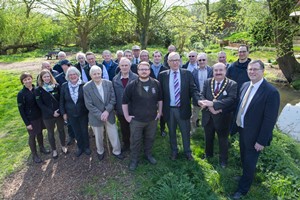