On 11 July 2019, Affinity Water, Herts & Middlesex Wildlife Trust and the River Beane Restoration Association jointly hosted an event at Woodhall Park which explored how good soil management can help our struggling chalk streams, and how partnership working can deliver effective improvements to the river environment.

Taking place in the Bruce Hall – a fabulous venue at the heart of the Woodhall Park estate near Watton at Stone – the day began with presentations from the hosts about the River Lea Catchment Partnership, and concluded with a tour of nearly a kilometre and a half of newly-created chalk stream river habitat.

Shaun Dowman from Affinity Water explained the twin benefits to be gained from 'no till' farming practices. Instead of ploughing before sowing crops, seeds are direct-drilled into the ground. This prevents the creation of a 'hard pan' layer which tends to form at the depth reached by a plough, and so allows the plant roots to reach much further into the ground. This in turn opens the soil structure and allows for greater rainfall infiltration to the aquifer below. The second benefit is a reduction in silt run-off from fields bordering rivers before the crop establishes.

Sophie Moritmer, who has led the river restoration project at Woodhall Park for Affinity Water, explained the scale and complexity of the work. The River Beane runs through the park, and was dammed in the 19th century to form the Broadwater Lake. This man-made lake with its cascade weir and sluice has long been an obstacle to the upstream passage of fish and invertebrate life, but forms part of the historic, 'listed' landscape of the park. The intense rainfall from Storm Katie in March 2016 led to a partial collapse of the lake's embankment, and the need to carry out repairs to this provided the ideal opportunity to make alterations that would both retain the lake but also improve the river habitat. Later in the day, delegates visited the new river sections and saw at first hand the impressive work to bypass two weirs in ways that give the best outcome for the landowner, the heritage bodies, and the river and its wildlife.

Sarah Perry, Living Rivers Officer for HWMT, shared the Trust's view on the value of partnership working in the Beane valley and plans for further wildlife improvements in the future, and Dave Stimpson and Bob Thornton from the River Beane Restoration Association explained how the actions of the RBRA over the past 30 years had resulted in reductions in abstraction, notably of 18 million litres per day at the Whitehall pumping station. Dom Martyn of The Rivers Trust talked of how the event should be seen as part of the wider London Climate Action Week and outlined other Integrated Catchment Delivery activities happening across the UK.

After a lunch supplied by Affinity Water, a key part of the day was a guided tour of the restored river sections. The group walked alongside the new 450m length of river downstream of the Broadwater. Previously, water flowing from the lake had entered a canalised channel passing the farm buildings before reaching a second weir. The new section, which bypasses that weir, reintroduces a much more natural river form, with gently sloping banks and a gravel bottom with riffles to provide invertebrate habitat and for fish spawning. There are meanders, variations in depth, and sensitive bankside planting and in-river vegetation too. David Standing (RBRA) explained that Riverfly sampling carried out at the site shows that the new river is teaming with life and although less than two years old, the new channel looks like it has always been there. Futher pools and scrapes have been created to the sides of the new channel as well.

The Broadwater and its associated weir and sluice have been restored too. The Woodhall Estate undertook removal of two centuries of silt from the lake bed while drained, and craftsmen from Herts Renovation have repaired the Grade II listed sluice and cascade structure. However, the most significant work here has been the creation of an additional river channel running parallel to the lake, providing a wildlife bypass to the weir and reinstating classic chalk stream habitat to an impressive 1 km new section of the Beane. Owing to the proximity of a main trunk sewer running beneath the valley, a more 'engineered' solution had to be adopted at the end of this new channel as it approaches the weir. Although formed from sheet piling and concrete, these works have been finished using traditional lime-mortared brickwork and stone copings to harmoniously blend with the historic structure alongside. Delegates were privileged to get up close to this work at the site and hear first-hand from the conservation craftsmen working on it. The new bypass channel was nearing completion at the time of the visit and is expected to be officially opened in September 2019. Once the bypass is operating, the lake will still receive water from the river which will flow over the cascade when levels are sufficient, but be offline from the main flow.

Read more about the work in Woodhall Park from the Woodhall Estate website. 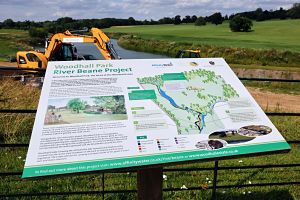