On the afternoon of Friday 26th June, the CMS were joined by project partners, County and District Councillors, volunteers and representatives from key organisations to celebrate the completion of the Waterford Marsh Project.

As the sun shone down on the River Beane, event attendees engaged in lively conversation about the project and were addressed with speeches of thanks from both CMS officer Angela Forster and Cllr Ken Crofton.  Following the cutting of a celebratory cake and a few photos, attendees were taken on a stroll around Waterford Marsh to look at some of the works that have taken place and the positive effects that these have had on the site.

We would like to extend our thanks to all of the partners and volunteers who have been so actively involved with the project and have contributed to make it such a success. 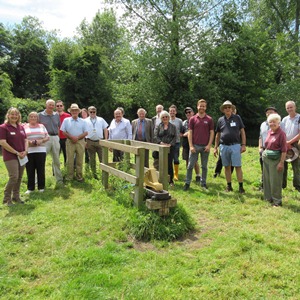