The project to remove silt from the river Mimram at Welwyn and replace it with gravel has started.

This will improve the river bed habitat for spawning fish and invertebrates.

The project, outlined in the catchment plan and funded by Natural England via the Lea Catchment Nature Improvement Area, is taking place at Singler's Marsh, a site owned by Welwyn Hatfield Council.  As well as containing a stretch of internationally important chalk river, it is also one of the few publically accessibly bits of the Mimram. HMWT are managing the project.

Silt will be removed from four five-metre-long sections of river, and replaced with gravel to recreate a series of 'riffles'.  These will be vital habitat for fish such as brown trout to spawn in, and for freshwater invertebrates to live in.  The project is scheduled to take four days and will finish early next week (w/c/ 2/12/13). 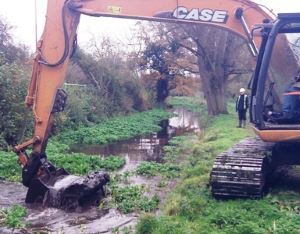