The UK’s rivers are not as healthy as they should be. Although many have improved dramatically over the past few decades, current problems include pollution, invasive non-native species, abstraction and physical modifications such as weirs.

This situation has been recognized at a European level by the Water Framework Directive (WFD). The WFD is a piece of legislation which became UK law in 2003. It states that all UK waterbodies (including rivers, lakes, seas) must reach ‘good ecological status’ by 2027. This means they should be clean and healthy, and contain the ‘right’ type and number of animals and plants. The UK has a legal obligation to meet this target. Rivers can be classified: 'Bad', 'Poor', 'Moderate', 'Good', or 'High'. Various categories of things are measured to assess their status: Fish, Invertebrates, Diatoms (microscopic plants and animals), Aquatic plants, The amount of water (i.e. flow), and Water quality.  The Water Framework Directive is the driver for much of the work being done in our river catchments, including our own Catchment Management Plans.

The Catchment Based Approach was piloted by Defra in 2012 and launched nationally in 2013.  The aim is to establish catchment partnerships formed of local people, landowners and statutory bodies, which will work collaboratively across all the catchments in England.  The hope is that this collaborative, bottom-up approach will be more successful at improving our rivers than previous approaches, which were lead from above by statutory organisations.  The ultimate aim of the Catchment Based Approach is to help the UK meet our targets under the WFD. 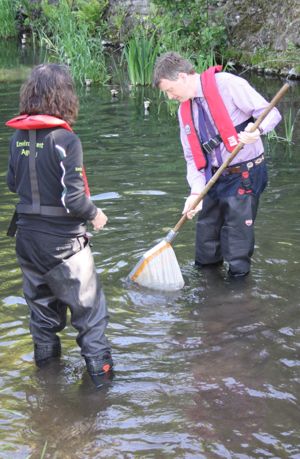